A close friend of Jim's, who is also a fellow officer, is wounded in the line of duty. With the recent tragedy weighing on his mind, Jim must get through his shift.

This episode starts in the locker room, where Officer Stenzler is showing Reed his new fishing reel. The two friends are planning a fishing trip for the upcoming weekend.


Once they are in the car, Reed starts telling Malloy about the fishing trip he is planning with Stenzler. He also lets Malloy know that lately Jean has been very worried about Jim and his safety. They are interrupted by a radio call, "officer needs help, shots fired, 9226 Van Arden, handle code 3". Malloy races to the call, which is "half-way across the district".
When they arrive at the scene, they discover that Stenzler has been shot. After helping at the scene for a few minutes, Mac sends Adam-12 back on patrol. 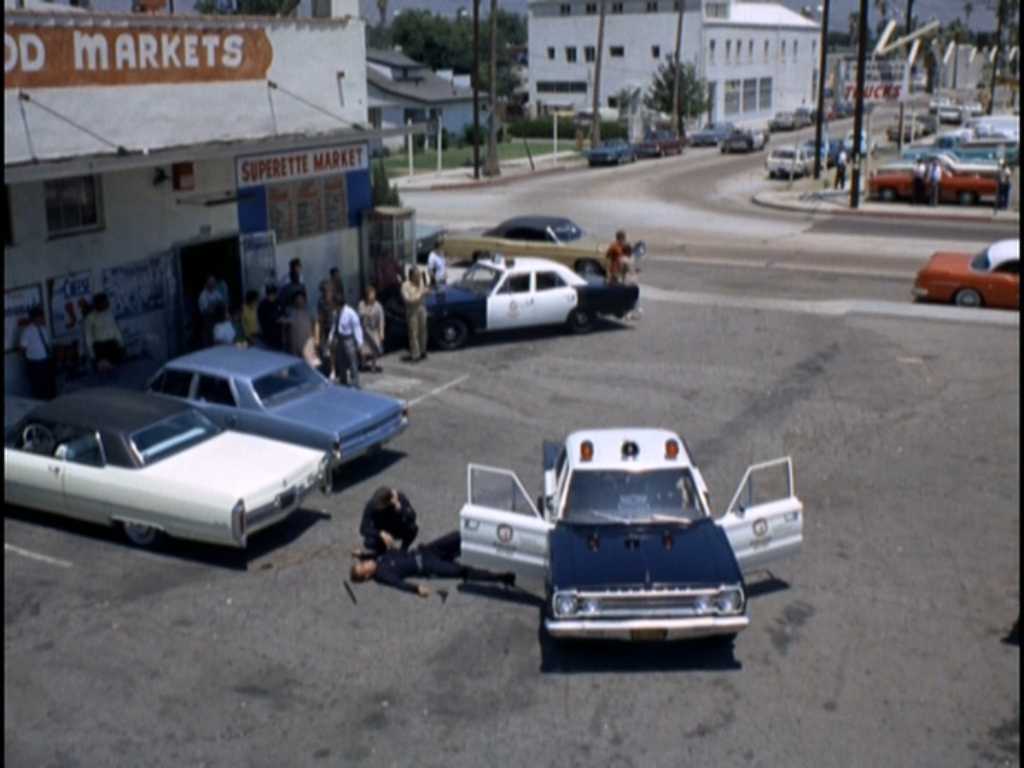 In the car Reed tells Malloy that he and Stenzler went through the Academy together and have known each other prior to that, too. He looks for assurance from Malloy that Stenzler will be OK. Instead of filling Reed with false hope, Malloy tells him, "I don't know, I'm not a doctor".
Malloy then spots a suspected drunk driver and pulls him over. He tells Reed, "You take him. Keep you're mind on what you're doing." The drunk gets belligerent, but Reed is professional the entire time.


After they book the drunk, Reed tries to call Jean but she is not home. Mac tells them that Stenzler could be paralyzed. Soon, they are back on the street and Reed tells Malloy more about his friendship with Stenzler. They are then called to 1017 North Peterson for an ADW (assault with a deadly weapon) call.


At the hospital, Reed and Malloy discover that the ADW victim does not want to make a complaint. Reed asks the Lieutenant if can see Mrs. Stenzler. The Lieutenant tells him that is not possible since she has been sedated.
After this, it is time for 7. At an authentic L.A. taco stand! During dinner, Reed tells Malloy that he is worried that Jean will think it is he who has been shot since the shooting has been on the news, but the officer's name has not been released. He is also worried that Jean may want him to quit the job now. Pete is not much help in this situation.

After they eat, Malloy notices a red Ford that is parked the wrong way with a bike sticking out of it's trunk. The car takes off and Adam-12 is right behind it. They pull the car over and interrogate the driver and passenger.
Well, obviously those guys are getting a ride to the station in the back of Adam-12.
When they arrive at the station, Mac gives them the news about Stenzler. 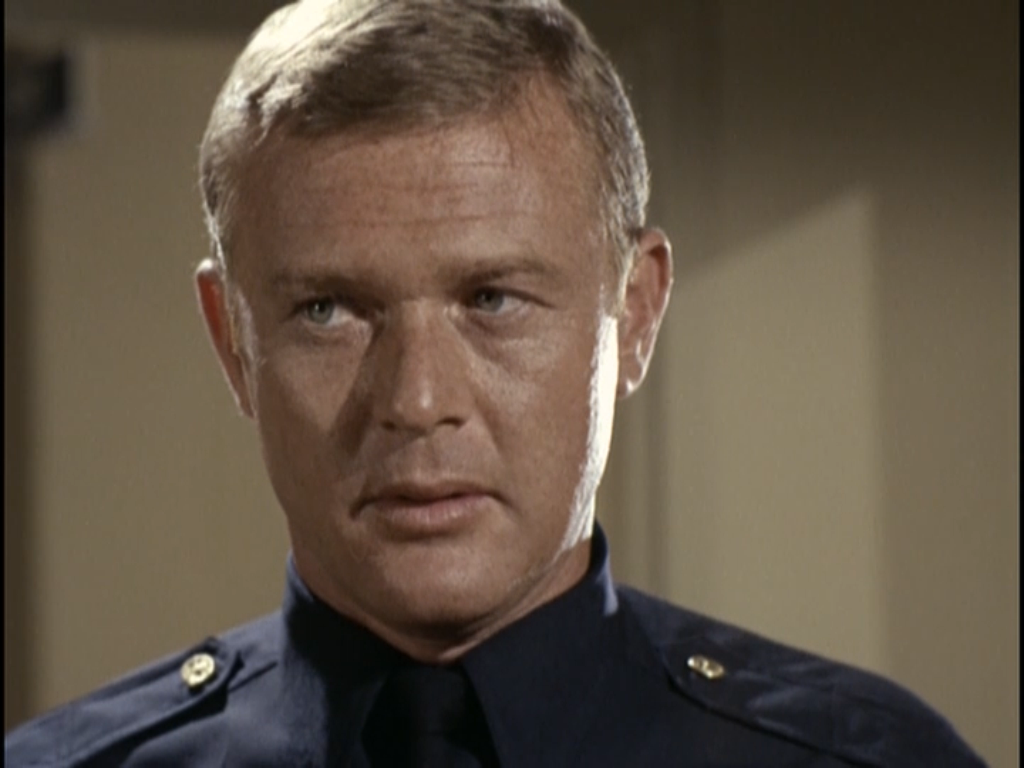 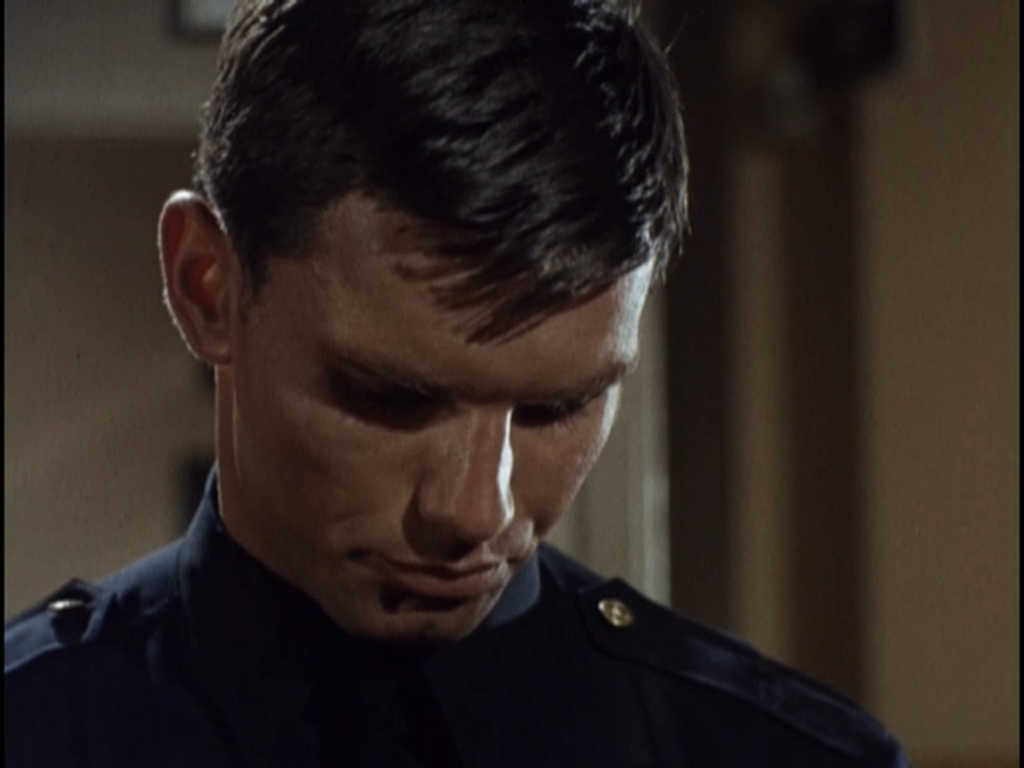 Reed finally gets through to Jean. She asks Jim to check on Beth Stenzler before she starts crying. After he talks to his wife, Jim knows they will talk about the dangers of the job when he gets home. He also knows that everything will be alright between him and Jean. 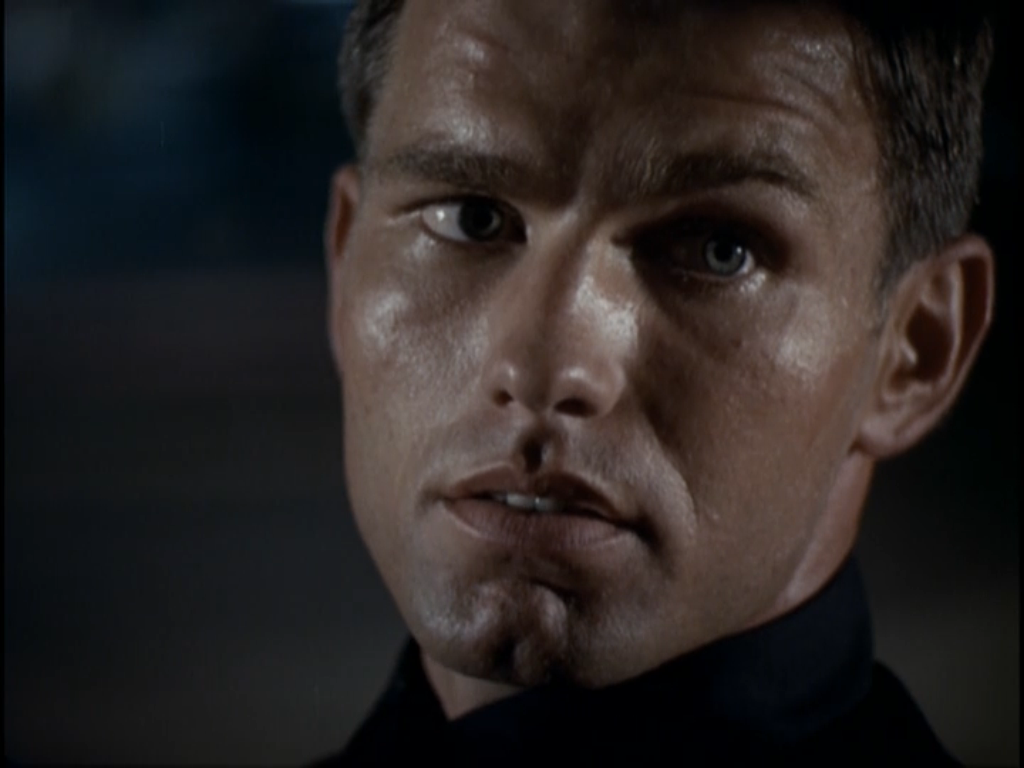 My thoughts on episode 5:
Reed's endless prattling on about his worry that Jean will be so worried about him that she will want him to quit the job really grates on my nerves. I just wanted to scream at the TV, "Good Lord, man, your good friend was just shot and you are making this about you!" I guess this is what makes a Malloy a great partner, though. He lets Reed work through the tragedy in his own way and is just there to listen. I would not have made such a good partner.
I've never been a cop or been close to any cops, so I don't know what they go through when one of their own is shot. Maybe they all have thoughts similar to Reed's. Maybe the writing in this episode failed to make those feelings entertaining. I don't know. Something about this episode fails to make me sympathize with Reed.
There are some parts that I like about this episode, though. I like the scene with the drunk driver, Reed is the utmost professional despite his emotions. I love everything about their meal break at the taco stand; The setting, the way Malloy tries to make him feel better through humor, the peace sign.
I'm split on this episode, I don't love it, but I don't hate it. Therefore, I give it a rating of: 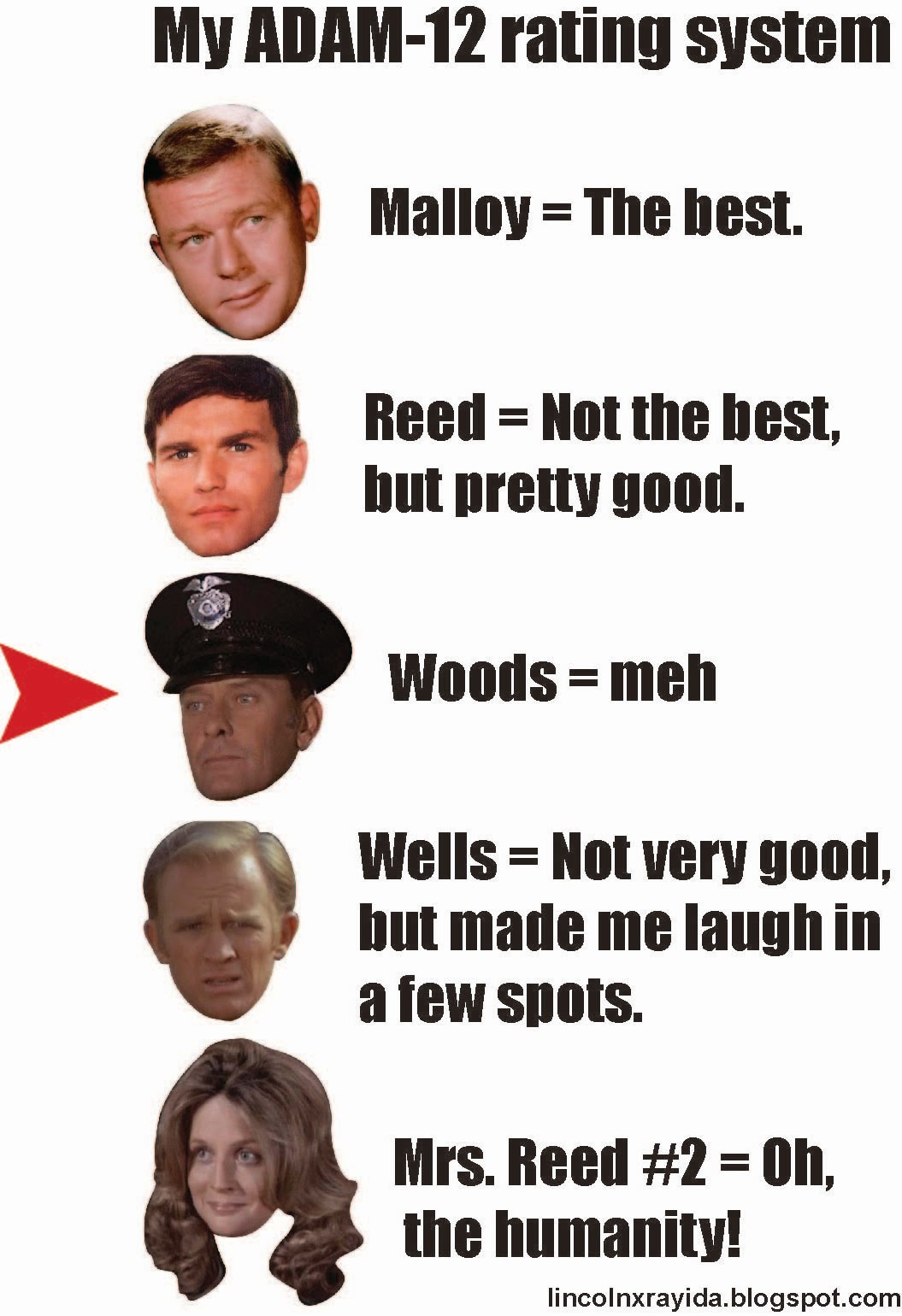 In this episode we learn more about police work, namely the difference between detective work and uniformed officer work.  At the beginning of the episode Reed thinks the detectives have the more exciting job, by the end of the episode he learns that each job has its pro's and con's. This episode also introduces us to Sgt. Jerry Miller, he is the laid-back antithesis of the tightly wound Joe Friday.

At the start of the episode Pete and Jim are in the break room before roll call when detectives Jerry Miller and Dave Hudson walk in. The uniformed officers and the detectives spend some time ribbing each other and belittling each other's jobs before Malloy and Reed have to leave for roll call.  As they leave, Miller tells Malloy, "try not to trip out there on the pavement, Malloy".

When they are in the car Reed asks Malloy if all detectives act like Miller and Hudson, "needling us, acting superior, just because we work uniform". Malloy assures him that they were just kidding around and the detectives have done "their time in black and whites".
They get their first radio call of the night, a missing child at 2911 W. Oakmont.
They arrive at the address and see Mrs. Bussey, she is afraid her four year-old son, Mark, has run away. Malloy quickly finds him when he looks in the basement window. He finds Mark watching their cat give birth to a litter of kittens. Mrs. Bussey is momentarily thankful.


Back to the street. Pete and Jim meet up with their informant, TeeJay (played by Robert Donner), a former "hype" who now helps Malloy. He tells them about a fight he heard in the hotel where he is staying. He also tells them that he saw a man leaving the scene with what appeared to be blood on his shirt.  Malloy decides they will go to the hotel and investigate.
Once inside the hotel, they question the man at the front desk, he has not heard a fight. He gives Pete and Jim permission to look around. They enter the room where TeeJay heard the noises coming from and see a dead body on the floor.

Knowing that they now have to preserve a crime scene, Pete tells Jim "don't touch anything". As soon as Pete says this, Jim wants to touch everything. Jim absent-mindedly swings the door shut, Pete dives for it and opens it by touching the top corner. He explains that if the door shuts, they won't be able to open it with out touching the knob. Then Reed wants to look in the man's wallet for ID, Malloy tells him to leave it alone. Malloy leaves the room to call the station and shuts the door, only touching the outside knob, he tells Reed to "stay on the door".

Detectives Miller and Hudson arrive and take over the investigation. They will make the report, question the other people at the hotel, and question TeeJay (Theodore Joseph Sims). Despite Reed's offer to help, the detectives tell Reed and Malloy that they'll take it from here. 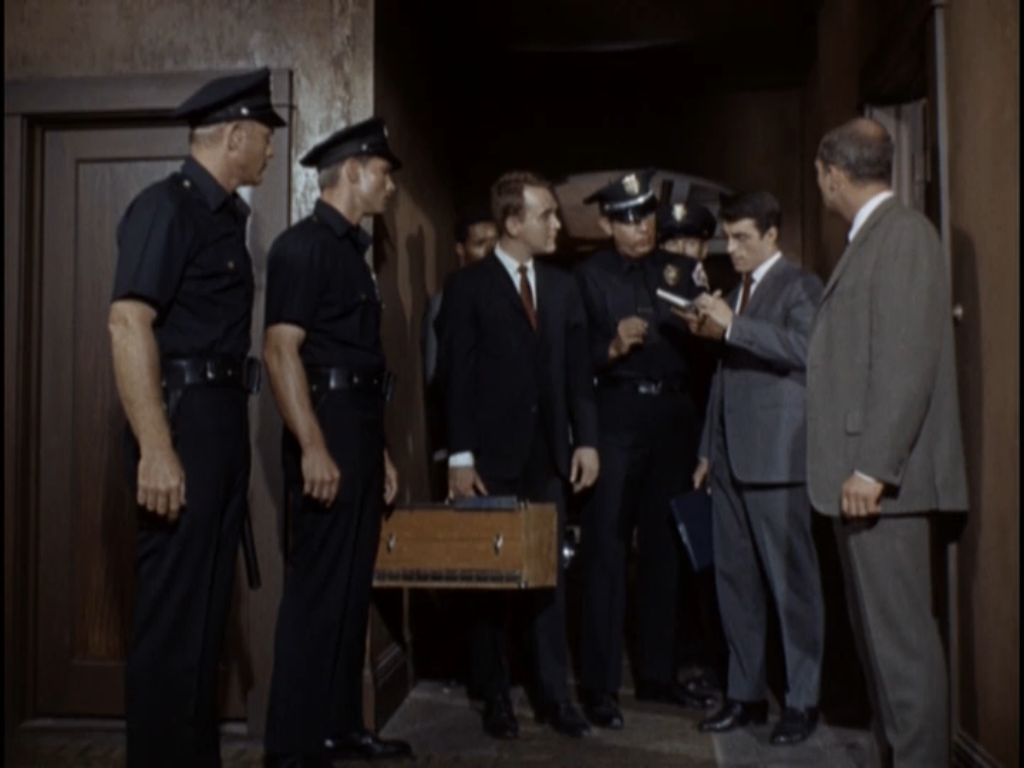 Back in the car, Reed is upset that he and Malloy had to walk away from the murder investigation. He is also upset that Malloy wouldn't let him convince the detectives to accept their assistance. Malloy tells Reed, "While we're back at the hotel, who's covering here on the street?"
Reed's frustation is temporarily halted when they receive a radio call for 586 (illegal parking). As soon as they hear the nature of the call, they know it is Mr. Cullen.
When they arrive at Cullen's snack bar, he wants Reed and Malloy to ticket cars that he considers illegally parked in his lot. Seems Mr. Cullen charges .75 a day or $15 a month to park in the lot behind his snack bar. He has made signs to let people know that they can't park there without paying. However, his signs are not visible or worded correctly according to the law. He has been given instructions on wording and posting the signs several times. According to Malloy, Mr. Cullen just doesn't listen. They leave Cullen's lot without writing any tickets since his signs are not correct.

After leaving Mr. Cullen, Reed and Malloy get a call to investigate a family dispute at 2641 West Van Arden. Mr. & Mrs. Beuhler are having a fight over that night's dinner. Mr. Beuhler is upset that his wife is serving him ravioli "straight from a can" again. Although her husband has struck her, Mrs. Beuhler does not want him taken to jail. Reed and Malloy try to get them to reconcile so they can get back to patrol.
Later Malloy tells Reed, "you handled that OK", it only took them ten minutes to get her "cooled down again". Reed is not reveling in a job well done, however. He is still upset about not being involved with murder investigation. Malloy tries to convince him that they get it all out on the street. "The beginning of it anyway", Reed fires back.
Malloy then notices a blue Mercury that "stiffened up" when they came up behind it. Reed checks the hot sheet for the license plate, which starts with Nora Ocean Ida (NOI). It is not on the hot sheet. Malloy then pulls in front of the Mercury and notices that the front plate does not match the back license plate. The Mercury takes off with Adam-12 in pursuit.
They chase the car to a dead-end where the occupants of both cars come out with guns drawn. The bad guys drop their guns and our good cops frisk them. Malloy finds drugs on one of the suspects and in the car. It looks like this is one case that they will not have to turn over to detectives.

They return to the station to book the suspects and run into Miller and Hudson, who have been running "ragged" since Malloy and Reed left them. Although, all their hard work did not help to solve the murder case; the victim's brother walked into Newton Station and confessed to the whole thing. "We could have saved ourselves the trouble", laments Miller. Reed and Malloy have had a more satisfying night since the men they arrested have been on the run for about a month, they are parole violators with six warrants apiece.
Before the credits roll, Miller tells Reed and Malloy that they did a "real good job protecting the scene" before the detectives arrived at the hotel. Reed, who is no longer upset, tells Miller, "Anytime, Sergeant. That's our job." Malloy is surprised by his change in attitude. 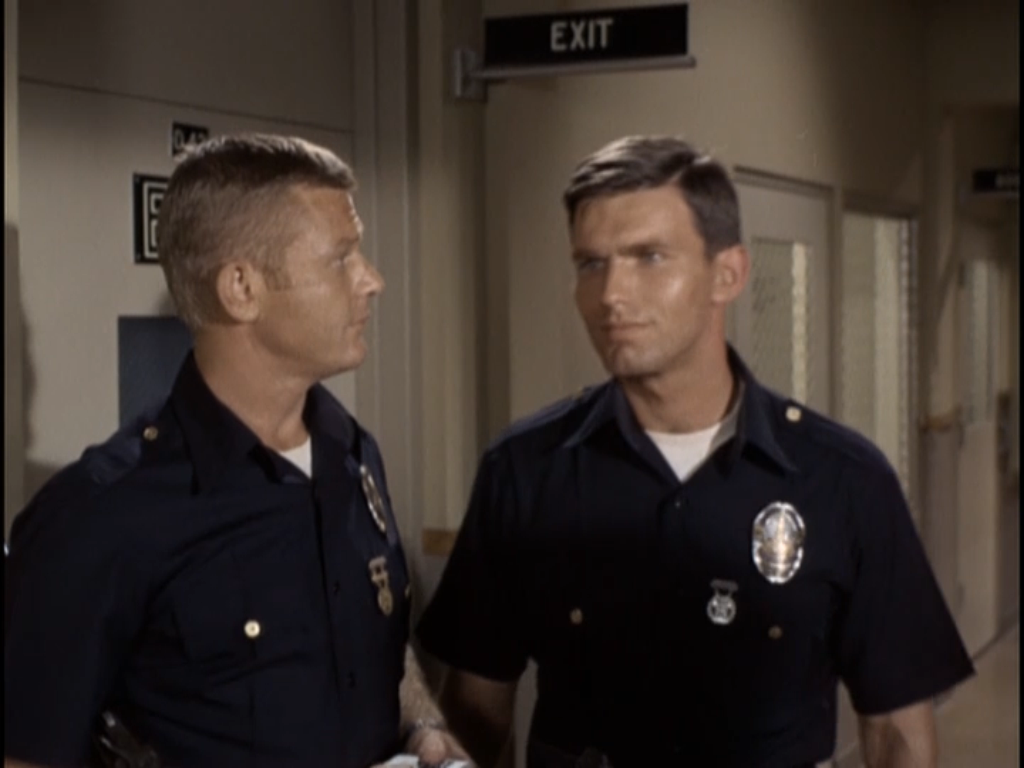 Another great episode! I love learning tid-bits about police procedure, like how to shut the door with the top corner so that prints on the knob are not destroyed and why detectives take over the investigation on big cases. This episode teaches those tid-bits without getting boring.
This episode did have some annoying characters in it (Mrs. Bussey, the Beuhlers, Mr. Cullen), but this creates lots of scenes for Milner to show us Malloy's frustration with priceless facial expressions.
So, in conclusion, learning stuff + Milner faces= 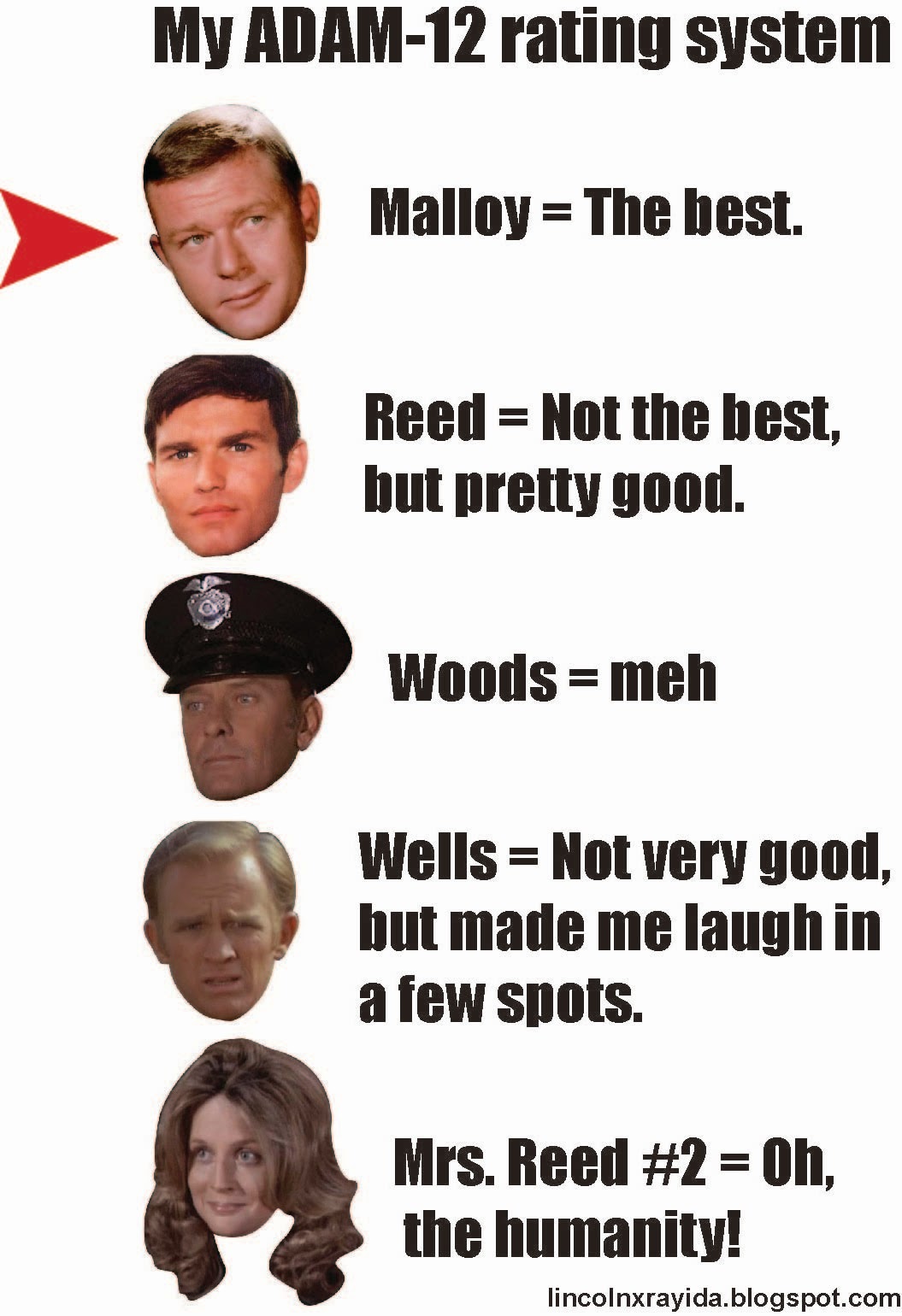