"Log 43: Hostage" is a "first-y" episode! This is the first episode where one of the boys is taken hostage. It's Malloy this time, next time it will be Reed's turn. But, we have to wait until season 4 for that. This is also the first episode that was aired in 1970. I like that the title is reminiscent of those 1970's made for TV disaster movies like, Flood and Hurricane (both of which featured Martin Milner).  Finally, it's the first episode to feature the SWAT unit of the LAPD.

Malloy gets more than he bargained for when he walks into Duke's cafe.

Pete and Jim are becoming more and more like and old married couple everyday, they each know what the other is thinking and feeling. They are in the car when Pete says what Jim's stomach has been thinking, "It's time for seven". Then, like an old, married couple, they head to their usual spot for lunch.

They arrive at Duke's and Jim decides that he doesn't want to converse with Pete during lunch. Why else would he stop to buy a newspaper as soon as they get there? Pete, unfazed by his partner's rudeness, proceeds to the restaurant. But, first he asks Jim for his order.

Meanwhile, Pete enters Duke's cafe and walks into this:

After the commercial, Jim runs to the patrol car while the gun man shoots at him from the window.


Inside Duke's, an injured Pete lies on the floor in shock while his captors discuss their next move.


Bernie and Vince are escaped convicts who were robbing Duke's cafe when Pete walked in. There are three other hostages with Pete; Duke, his waitress girlfriend, Angie, and another patron named Stony.

Bernie goes out the backdoor of the cafe to see if they have a clear escape route.

The officers inside the other patrol car, were around the corner when Reed called for help.


Not wishing to antagonize the suspects, the officers back away. Reed then takes charge of the situation and divides the task of directing traffic away from the area with the other officer.

Inside the restaurant, Vince is worried that Malloy might die. If he does, Vince knows he and Bernie have "had it".

Outside, Mac has arrived and Reed has briefed him on the situation. The presence of more officers makes Bernie more nervous. He tells the hostages to sit on the floor, away from the windows. Angie tries to break away and tend to Malloy.

At the command post, Mac requests a SWAT team and an ambulance. He then goes over the plan with Reed. They'll set up a perimeter and clear out any buildings that could be in the line of fire. First they'll try to talk the suspects out. If that does not work, they'll use the tear gas.

While Angie tends to Malloy, Stony asks Duke if he is going to combat their captors. He is surprised when Duke tells him that he isn't going to do anything. Duke, like Reed, has also learned a thing or two from Malloy.

After Angie has cared for his injuries, Malloy has regained consciousness. Seeing that their most valuable hostage is now awake, Bernie informs him of their scheme. He wants to trade a live Malloy for their escape. But, Malloy knows the police won't go for it and tells Bernie to "forget it".

By now, Bernie and Vince are aware that the police will use tear gas in order to make them surrender. When they mention this in front of Duke, he tells them that Stony has bad lungs and wouldn't survive a release of tear gas. Bernie decides to use Stony's condition to buy some time.

After the display with Stony, Malloy asks Bernie for his last name. He refuses to give his surname to Malloy.

Bernie asks if Malloy can walk, he's planning on taking him out of the cafe as a hostage. He also mentions that Vince will probably want to take Angie when they leave. Malloy, sacrificing himself to save Angie, tells Bernie that two hostages will only slow their escape.

At the command post outside, the SWAT team has arrived with Sgt. Gus Baron. In case you were wondering why SWAT was requested for this particular case, here are the criteria for requesting SWAT from lapdonline.org:

The Incident Commander shall request SWAT when at a barricaded or hostage incident when the suspect is probably armed; the suspect is believed to have been involved in a criminal act or is a significant threat to the lives and safety of the public and/or police; the suspect is in a position of advantage, affording cover and concealment or is contained in an open area and the presence or approach of police officers could precipitate an adverse reaction by the suspect; and, the suspect refuses to submit to arrest.

The situation here fits all of the requirements for Mac to request SWAT: it's a hostage incident, the suspects are definitely armed, the suspects are known to have been in involved in a criminal act (prison escape), they are a significant threat to lives of the public and the police, approach of officers has brought about an adverse reaction from the suspects, and the suspects refuse to submit to arrest.

After the SWAT snipers move into position with their sights drawn on Duke's, Mac lets Bernie and Vince know that they are surrounded and have no chance for escape. 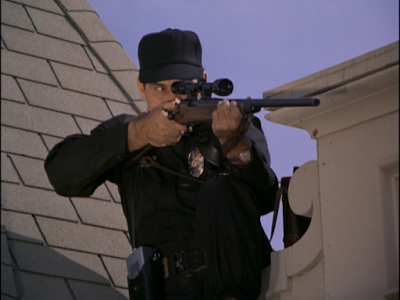 Inside the cafe, Bernie and Vince argue about what they should do. Vince wants to give up, he would prefer a cell over a casket. Bernie disagrees, "I know about one, the other's gotta be better." Bernie wants Vince to trust him. He believes if they stick together, they will be able to walk out of the restaurant alive. Malloy sides with Vince and encourages the two suspects to surrender. 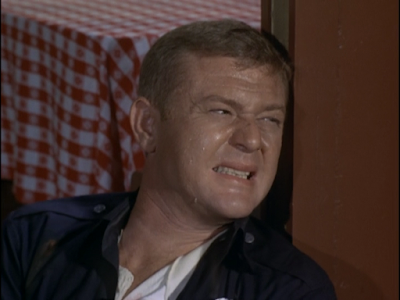 Bernie decides to set his plan in motion and walks outside with Malloy. He wants to make a deal, one cop for him and Vince.

Bernie then sweetens deal and offers, "one cop and three solid citizens for a couple of bust-outs." It's his final offer, but Mac is not taking it. He will only accept a deal where Bernie and Vince throw down their guns and come out with their hands up.

Sgt. Baron asks Reed if he would accept Bernie's deal. Although his partner is bleeding and he wants to get him out, Reed knows they can't agree to the suspect's terms.

Without a positive response from the police, Bernie hustles Malloy inside. Frustrated by the circumstances, Bernie turns against his partner. He blames Vince for putting them in this situation, it was his idea to hold up Duke's and shoot Malloy. He tells Vince to get out. Vince seizes the opportunity to save his life. He exits the restaurant, sets down his gun, and puts his hands in the air.


Bernie's done proposing bargains and now has a plan to walk out of there and into his car, which is parked in front of Malloy and Reed's patrol car. Malloy will walk out of Duke's with Bernie, they'll take their time walking across the street to the car, and then they will get into the car together "like Siamese twins".


Duke thinks Bernie's plane is asinine and tells him so, "You're really not bright are ya? Malloy's a cop, they're not gonna spare him if it means letting you get away." Malloy knows that Duke is right, but he bravely stands up and says to Bernie, "OK, let's go."


As soon as Bernie and Malloy exit the restaurant, Sgt. Baron tucks his gun in the back of his waistband and walks toward them. He'll try one last time to negotiate with Bernie before they have to use deadly force.
Baron then tells him he might as well give up, they've pulled the ignition wires on his car and 1-A-12.

Baron asks Bernie for his gun again and suggests that he is too tired to go on. Bernie agrees that he is tired and begins to raise his gun towards his head.
Malloy, now free from his captor, reunites with his partner.

Reed calls for the stretcher and the story is over.
Right?
Not really.

At first I was kind of lukewarm about this episode. Malloy's taken hostage, he's shot (but the late '60's effects don't make it seem very threatening), the captors fight amongst themselves, they try to negotiate with police, there's a final stand-off, and, of course, Malloy survives. Yada, yada, yada.

But, then I read more about SWAT and the requirements for the use of the team. As I read them, I thought, "No wonder Mac called SWAT, this situation fits all of those stipulations." I was able to connect real-life LAPD procedures with the story and it made me feel super smart! I also learned that when this episode was first aired, the SWAT team was less than five years old. So, this was a new part of the police force that the public was learning about through Adam-12. I wonder if the 1970 viewing public also felt super smart after viewing this episode.

I'm still lukewarm on the story of Malloy being taken hostage, I didn't find it particularly suspenseful or dramatic. But, I'm super stoked that I was able to learn about another aspect of police work! So, I give "Log 43: Hostage" a rating of: 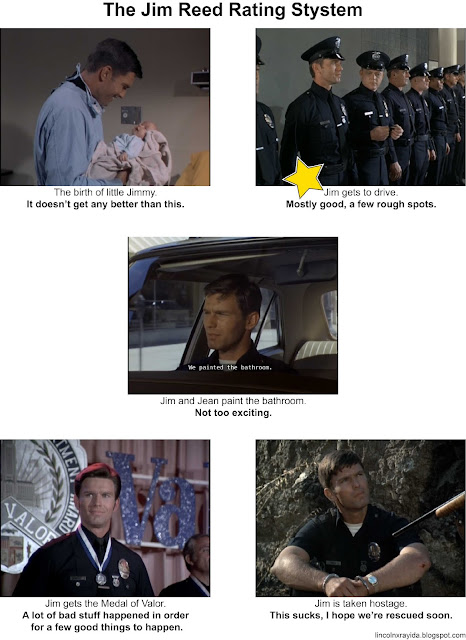 Oh, by the way, I linked this blog to my Google+ account. Hopefully, this means that you can follow me on Google+, which means you would also be following the blog? I guess? The instructions for allowing people to follow the blog aren't all that clear and I know the "follow by e-mail" has not worked for some people. I'll keep trying to figure out how you can follow the blog. I also have an e-mail for blog-related stuff. So, if you want to drop me a line, my e-mail is: ritamalloylxi483@gmail.com.